4 of The World’s Deadliest Trees

Most of the time, trees are pretty harmless. We are safe to stand beneath them and marvel at their beauty. The trees on this list, however, could kill you if you get too close.

There’s actually a tree holding the Guinness World Record for “World’s Most Dangerous Tree.” It’s the Manchineel Tree and it is found primarily in the Caribbean and Gulf of Mexico. The tree’s bark is covered in sap that will cause blindness and blistering of the skin should it come into contact with a person or animal. Even standing under a Manchineel in the rain can result in skin blistering, and encountering smoke from burning the wood can cause blindness.

The Manchineel bears fruit known as the “death apple,” which is slightly sweet yet very bad to eat. Just a small bite will cause boils to form in your mouth and throat, and swallowing it could kill you. Today the Manchineel tree is an endangered species in Florida.

2.  Cerbera odollam a.k.a. The Suicide Tree

The seed of the Cerbera odollam has reportedly been used in more suicides and murders than any other plant. The tree is native to India and other parts of Southern Asia, and contains a toxin called cerberin. This potent compound disrupts the function of your heart muscles, leading to an irregular heartbeat that can be fatal if enough cerberin is ingested.

Because the flavor of this poisonous plant is easily disguised in food, and the toxin is notoriously overlooked by medical examiners, some refer to cerberin as the perfect murder weapon. In the decade between 1989 and ‘99, Cerbera odollam was reportedly listed as the cause of more than 500 deaths in the south-west Indian state of Kerala alone (source). 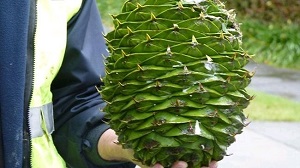 This tree can certainly be deadly, but historically it has also given life to its surroundings. The Bunya Pine, or Araucaria bidwillii, has existed since dinosaurs roamed the earth and is now found almost exclusively in Queensland Australia. Every few years, Bunya trees are known to drop extremely large cones weighing up to 20lbs, which is particularly dangerous for unsuspecting passersby.

While their super sized cones can be fatal when falling, these “living fossils” have offered native people an indispensable source of food for hundreds of years. Feasting on the nuts produced by the cones has inspired gatherings where tribes perform ceremonies, trade goods, settle disputes, and arrange marriages.

If we’re talking about poisonous plants, this historically significant species should definitely be named. Hemlock was widely used in ancient Greece as a means of execution and suicide, claiming its most famous victim when the philosopher Socrates took his own life in 399 b.c. . Ingesting even small amounts of Coniine, the plant’s potent toxin, will cause “ascending muscular paralysis” which will eventually reach the respiratory muscles and result in death.

This deadly tree is native to the temperate mediterranean and considered an “noxious weed” in 12 U.S. states, including Oregon and Washington. Here’s what you can do if you find it.

Do you know of any other deadly trees? Add them to our list in the comments below!

Is Your Tree A Liability?Inexpensive Tree Care Blog