Forest fires are scary and tragic, this year especially. The Oregonian reported that

Throughout this dry season, our region has been the nation’s top priority for emergency resources for a record-setting 43 days, and cost to fight the fires ($446 million) has nearly doubled last year’s figure. 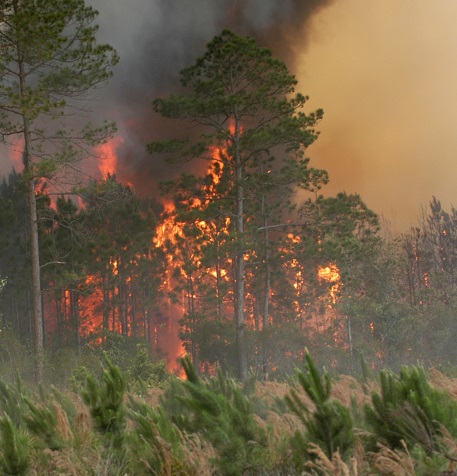 What Causes a Forest Fire?

Forest fires are started in a variety of ways. Lightning has always been a major cause, especially this year. But, if Smokey the Bear has taught us anything, we know that human activities start most of them. Cigarette butts, campfires, and agricultural equipment can easily ignite an uncontrollable blaze.

“More than 83% of U.S. forest fires in 2006 [a record-holding year] were started by human activities, accounting for the burning of nearly 4.4 million acres. However, lightning-caused fires burned more total area – nearly 5.5 million acres.”

Once a fire is started, its behavior is influenced by a number of factors, including weather, the amount and type of available fuel (grass, brush, leaves, needles), and topography. These factors affect the fire’s intensity, how fast it moves, and in what direction.

For example, a dry, dense, hillside forest where dead branches litter the ground and woody vegetation creates a ladder to the upper canopy will burn differently than a forest on flat lands that has been mechanically thinned to reduce available fuel.

Forest fires are a part of nature, and they can benefit the ecosystem. However, the massive fires of the past decade have done major damage that may not heal. They’ve destroyed homes, farms, and habitats, and taken lives.

The 36 Pit fire near Estacada and Scoggins Creek fire near Forest Grove have forced resident to evacuate, and The Buzzard Complex (five separate fires that grew into one massive blaze northeast of Burns, Ore. in July) claimed several farms, including cattle.

Wildfires also pollute the air with carbon dioxide, leaving lasting effects on the environment and threatening our health.

Scientists with the Pacific Northwest Research Station are conducting a range of studies relating to the effects of fires on the environment. Including:

These researchers are continuously working to understand where and how wildfires are likely to burn, and helping decision-makers dispatch strategic fuel-reduction treatments in the most needed areas.

And, as we speak, brave men and women from our region and all over the country are battling the blazing fires, risking their lives to contain them and protect our cherished wilderness.

From Inexpensive Tree Care to scientists and emergency crews everywhere, we thank you!

If you’d like to do your part to prevent forest fires and help heal our environment, take the pledge with Smokey Bear, donate to the Arbor Day Foundation’s replanting efforts, or visit Oregonforests.org to find out how you can volunteer.