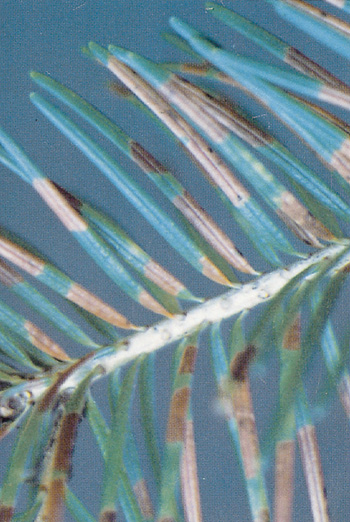 Despite its name, Douglas fir is actually a conifer — an evergreen — not a fir. It has its own genus in the pine family, making it unique, but certainly not rare. The majestic, fragrant trees can grow as tall as 300 feet and thrive in the moist, cool forests of the Pacific Northwest. Douglas fir is Oregon’s state tree and a favorite Christmas tree across the country.

If you live in a wooded area, there’s a good chance you have a Douglas fir or two in the mix. Keep them healthy by watching out for the following tree diseases.

Evergreens face a number of fungal pathogens when rooted in moist environments.  According to the American Phytopathological Society, there are three dozen pathogens that affect Douglas fir, including root rots and cankers. Some can be life threatening, but a healthy Douglas fir can adapt to many of them over time. On the other hand, fungi can weaken a tree against other infections.

This infection is caused by Rhabdocline weirii fungus. The wind carries the fungal spores during rainy fall and winter weather. When they find a host tree, they appear in the Spring as yellow spots on the tree’s needles. As the spots grow, the needles will turn reddish-brown and eventually fall off the branch.

Adequate air circulation will help fight the spread of Rhabdocline Needlecast. Treatment to kill the infection should be performed by a certified arborist.

Swiss Needlecast is caused by Phaeocryptopus gaeumannii fungus. Researchers at Oregon State University suggest that the warming climate could be responsible for the spread of the disease in the forests of the Pacific Northwest. Like the previous needlecast, the spores disperse in the wet, cold months. But instead of yellow spots, in the early Spring black lines will appear on the underside of the flat Douglas fir needles. Year-old needles suffering from Swiss Needlecast will turn brown and drop off the tree, and in severe cases the tree may become stunted.

Good air circulation and quarantine of new trees can help minimize the risk of new infections. A tree care professional can help you with established infections. .

Sudden Oak Death is caused by a soil-borne pathogen called Phytophthora ramorum. Since it’s discovery in California in 1995, Sudden Oak Death has been found in other species along the West Coast, including Douglas fir. The disease will appear as cankers on branches and lesions on foliage, which will kill the tree eventually. At this point, quarantining affected trees and soil is the only way to manage Sudden Oak Death.

If you notice signs of a disease amongst your Douglas fir, contact Inexpensive Tree Care to discuss your options in saving them.

Why Do Leaves Change Color In The Fall?Inexpensive Tree Care Blog

Is Mistletoe The Kiss of Tree Death?Inexpensive Tree Care Blog