Dutch Elm Disease (DED) is a fungal infection of elm trees spread by beetles, through the trees roots, and by humans. The fungus produces spores in tunnels carved by beetles beneath the bark of infected wood. The beetles emerge in the spring to feed on healthy trees and the spores on their bodies are spread. The fungal spores of DED grow and secrete toxins into the tree’s vascular systems, cutting off their water supply and killing the tree’s living cells. An entire tree can die in only a few weeks or take as long as a year depending on how quickly the fungus spreads down to the roots. Early symptoms of an infection include wilted or brown leaves and sparse foliage – first on single limbs and eventually throughout the entire tree – followed by premature leaf loss.

Elm trees have provided man with an extensive list of uses for thousands of years. Today, elms are valued for their beauty and functionality, as well as for cultural and historical reasons. The trees have a dense canopy but lack low-hanging branches, making them favorable shade trees. They can endure all kinds of mistreatment like over pruning, root damage and exposure to deicing salts. Elms can also survive high winds and flooding, making this a favorite tree for planting in parks and along city streets in urban areas. The wood of elm trees has also been used for numerous purposes throughout history, from wheelwrighting and boat construction to medicine and food.

Dutch elm disease has become one of the most destructive plant diseases in history. It has killed millions of trees throughout Europe and North America, causing billions of dollars of losses and damaging the beauty of urban landscapes. Because elm species native to China are resistant to DED, it is a popular theory that the disease originated in Asia. However, DED was first identified in 1922 in the Netherlands where thousands of elms were dying, and given its name in honor of the dutch scientists who isolated the fungus. The disease appeared in America for the first time in Ohio in 1930, having reached the U.S. via infected shipping crates. DED spread rampantly through the east coast, and by 1972 the European bark beetle, the primary transmitter of the fungus, was found in all but four states. 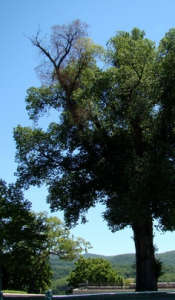 disease would have a devastating impact on the city’s urban forest if allowed to persist. Portland’s Urban Forestry division has worked to stop the spread of the harmful fungus by establishing a quarantine effective in 12 of Oregon’s counties. All states in the U.S. except Alaska, Arizona, Florida, Hawaii, Louisiana, New Mexico and Utah are also under quarantine. This prohibits any part of the elm species – or even equipment used to prune or dispose of any elm tree – from entering the state of Oregon from other quarantined areas.

Elms are most susceptible to DED in the spring and summer months, so the city of Portland has also banned the pruning of elm trees between April 15th and October 15 to prevent resulting open wounds on the tree from further attracting beetles. Each summer when the symptoms of DED are most apparent, the Urban Forestry Division monitors Portland’s elm tree population. When an infected elm is found they must act fast to remove it and prevent the disease from spreading. The tree is carefully removed, the stump is ground, and the wood is chipped and buried to keep from attracting beetles.

Urban Forestry also protects the city’s elms by applying a fungicide to approximately 450 elms on a 3-year rotation, targeting significant elms in our parks and public spaces. The nonprofit organization Save Our Elms also puts together neighborhood inoculations, applying fungicide to about 300 elms each year.

If you spot an elm tree displaying signs of Dutch Elm Disease, please call Urban Forestry at (503) 823-4489 or email trees@portlandoregon.gov