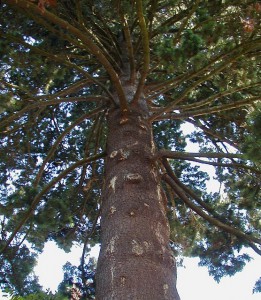 The Pacific Northwest is well known for its expansive forests and lush green landscape. Hundreds of thousands of plant species thrive in our damp, mild climate.

Portland, specifically, is home to many trees that are rare and historical. We hold immense value in these trees and protect them vigilantly. In May of 1993, the City of Portland enacted an ordinance that identifies and protects particularly significant trees in the area. These trees are of special importance to the city because of their age, size, type, historical association or horticultural value. The Heritage Tree ordinance holds a list of 114 species and 311 trees. Listed below are the first five to become Heritage Trees and are also considered historical landmarks.

1. American Elm (Ulmus Americana). This deciduous tree is more commonly found east of the rocky mountains and thrives in floodplains and swampy grounds. The American elm is a particularly hardy tree, withstanding winter temperatures as low as −44 °F. As longs as these trees remain unaffected by Dutch elm disease, they can live for several hundred years. This specific American Elm was planted in 1870. It is 78 feet tall and its canopy spreads 105 feet wide. Location: 1111 SW 10th Ave.

2. London Planetree (Platanus x acerifolia).  This deciduous tree is generally considered to be a hybrid of the oriental plane and the American sycamore. It’s first occurrence was recorded in Spain in the 17th century where an oriental planetree and an American sycamore grew near one another. It’s leaves are maple-like and it bares little seed balls covered in stiff, thorny hairs that help disperse the wind. This London Planetree was planted next to the Sylvester Farrell house in 1880. It is 65 feet tall and its canopy spans 95 feet. Location: The Northwest corner of SW Park and SW Main Street.

3. Tulip tree (Liriodendron tulipifera). This is a characteristically large deciduous tree of the magnolia family. It is more frequent in the Eastern U.S. and commonly grows to 165 feet in height. There have been unconfirmed reports of tulip trees reaching 200 feet. They are known for their large yellow flowers resembling tulips, although they are not related. This tulip tree was planted in the 1890s. It is 72 feet tall and its canopy is 65 feet wide. Location: 1403 NE Weidler St.

4. Oregon white oak (Quercus garryana). This deciduous tree, commonly called the Garry Oak, is the only oak tree native to Oregon. It grows west of the Cascade Mountains, in the Willamette, Umpqua and Rogue River Valleys, and along the Columbia River Gorge. The Oregon white oak is often found hosting growths called galls that are created by wasps. This Garry Oak is privately owned, 40 feet tall and twice as wide. Location: 2137 SE 32nd Place.

5. Austrian pine (Pinus nigra). This is a large coniferous evergreen tree, that can grow up to 180 feet tall at maturity. It is more commonly found in the mediterranean region. Its needles are thin and flexible and it produces cones that appear in the spring and release seed in the winter. The Austrian pine can be very long-lived, with some trees living for over 500 years. It is believed that this Austrian pine was planted in the late 1800s by one of Portland’s first florists, Henry Miller. It is 107 feet tall and spans 55 feet in width. Location: Corner of Jefferson and SW 20th Ave.

In addition to the above heritage trees, there is an abundance of other native trees that can be found all over Portland. This is by no means a complete list of Portland trees, but for tree fans out there, see if you can spot these native Portlanders.

Ponderosa pine (Pinus ponderosa) – Originally documented near Spokane over 190 years ago, this evergreen tree can grow very large (over 230 feet) and is the most widely distributed pine species in the United States. The bark makes it identifiable: large plates, a red-orange color, and deep, dark crevices. The needles are quite long and slender.

Pacific yew (Taxus brevifolia) – Sometimes growing higher than 50 feet tall, the Pacific yew is smaller than the Ponderosa pine and has shorter, flatter leaves. The evergreen also had a hand in helping treat different types of cancer as Taxol, a chemotherapy drug, is derived in some part from the tree, although the discovery was made after other treatments had been in use.

Pacific madrone (Arbutus menziesii) – When mature, the thin reddish bark of the Pacific madrone peels away naturally to reveal a smooth green surface. The common height of the tree can reach 80 feet, but the madrone can reach 100 feet under the proper circumstances. The bark and leaves were used by Native Americans for medicinal purposes, such as stomach aches and skin problems.

Pacific willow (Salix lucida ssp. Lasiandra) – This deciduous tree thrives in damp conditions and heavy soil, so they are ideal for soil erosion around river banks and floodplains. While the Pacific willow grows quickly, it doesn’t live very long. It usually tops out at 45 feet and the toothed leaves are long and slender.

Whether found in the middle of the bustling city or thriving on the outskirts, these Portland trees are just part of what makes this part of the world so attractive. The mild weather (yes, rain is considered mild in the Pacific Northwest) make for ideal growing conditions.