Native Trees Of The Willamette Valley

Many people in the Northwest have come to appreciate native plants, not only in the wild, but in our own backyards as well. These trees are uniquely adapted to our local soils and climate, and can provide critical habitat for native wildlife, even in urban areas. With so many trees lost to urban development in the last century, it’s important to reintroduce native plants, helping to mend our ecosystems. Here are some of the native trees the Willamette Valley is known for

Size: The Oregon Ash is one of 16 ash species known throughout the U.S., and the only one native to the Pacific Northwest. They can grow to be more than 80 ft. tall, 30 inches wide in the trunk and 250 years old.

Climate: Oregon ash trees are well suited for mild, humid climates where the summers are cool and winters are wet (sound familiar?). These trees can grow in heavy soils that are poorly drained or flood seasonally – soils that are too wet for other trees to tolerate.

Foliage: Once an Oregon ash reaches about 30 years of age it will begin to produce seeds. In the Spring, they will present greenish-white flowers at the base of new foliage, and when Fall hits, their winged seeds will be dispersed by the wind.

What to watch out for: While mistletoe is great for getting kisses at Christmas, for the Oregon ash it is a harmful disease. Also beware of weevils and leaf spots caused by fungi. 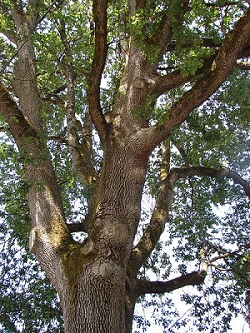 Size: The Oregon White Oak is one of the few deciduous oak species native to the West Coast. They typically reach between 40 and 90 ft tall, but they are slow-growers. Their trunks can become as wide as 90 inches in diameter (typically more like 30 or 40 inches), and when growing in open areas, their crowns can become as wide as the tree is tall.

Climate: Oregon oaks can grow across a range of climates, which usually have moderate to extreme summer drought and 10-100 inches of annual rainfall. With adequate moisture throughout the rainy seasons, these trees will thrive where severe summer drought may limit other species.

Foliage: Oregon white oak trees usually flower late in the Spring. Greenish-yellow catkins will appear at the base of new shoots and small red flowers will bloom in the axils of new leaves. Their acorns ripen from August to November. The large leaves of the Oregon oak are a great addition to compost mixtures.

What to watch out for: Hundreds of insects live on Oregon white oaks, although few cause serious damage. The most troublesome pest is the western oak looper, which can devour leaves over large areas of the tree. Also be on the lookout for mistletoe and root rot.

Size: Bigleaf maples are one of the most abundant tree species in the Pacific Northwest. Mature Bigleaf maples will usually be between 50 and 100 ft tall. When grown in the open they will have broad, rounded crowns, and more narrow crowns when grown in a forest. Some have been known to live for 300 years.

Climate: This species of maple is most prolific where the climate is mild and humid, with a moderately wet growing season. They thrive in the cool moist environment of the coast range but can also tolerate the warmer, drier conditions of Southwestern Oregon. Bigleaf maples will grow best in deep, well-drained soil with lots of moisture.

Foliage: Bigleaf maples are known for their large, iconically shaped leaves, which are also great for composting. But, once they reach 10 years of age they will also start to produce flowers and seeds. They bear greenish-yellow flowers in cylindrical racemes just before the leaves sprout in early spring.

What to watch out for: Old or damaged maples can suffer significant defects caused by wood-rotting fungi, which invade through wounds on branches and stems. As far as bugs go, the carpenter worm can cause severe damage in bigleaf maples of all sizes. 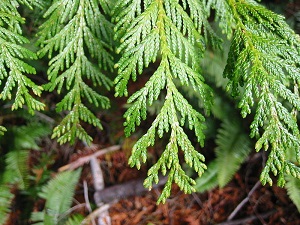 Size: The Western red cedar shares a genus with the California Redwood and can also become quite large. The biggest one in Oregon is located on the Clackamas River, standing 187 ft tall and about 11 ft wide. When grown in the open their crowns will reach the ground, but in a forest the crown will only exist at the top. They can also live for many centuries. The oldest Western red cedar on record is 1,460 years old.

Climate: The “tree of life” can tolerate full sun, but would be a great tree to plant in a heavily shaded area as that is what they prefer. Western red cedars will naturally thrive in wet soils near streams and swampy areas.

Foliage: This tree’s tiny, green, scale-like leaves grow together in flat sprays and give off a notable fragrance. Their cones are slender with thin scales, which will turn from green to brown in the Fall when they open and shed seeds. Other cones are smaller, start out red or purple, and produce pollen in the Spring.

The Western red cedar is better known for its soft, reddish-brown timber, a popular building material because of its lovely aroma and natural resistance to decay.

What to watch out for: Many beetles and other insects like to make the western red cedar their home, but the trees do not suffer much damage. Do watch out for the gall midge, or gall nat, which has been known to infest cedar cones. The Western red cedar is less susceptible to disease than most other tree species because its heartwood is toxic to fungi and other pathogens.